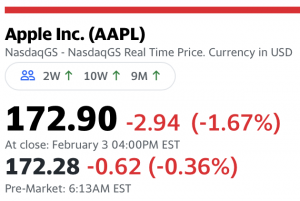 U.S. stock futures gained, boosted by a jump in Amazon.com and Snap shares in premarket trading, after a volatile session marked by a selloff in technology stocks...

Sharp moves in the share prices of large technology and social-media companies have an outsize impact on broader indexes. Amazon.com had a 3.3% weighting on the S&P 500 as of Wednesday, according to data from S&P Dow Jones Indices. Meta, whose shares tumbled Thursday, had a 2% weighting.

“In the U.S., the big tech stocks make up a very large part of the index,” said Mike Bell, global market strategist at J.P. Morgan Asset Management. “There’s been big differentiation between the big growth stocks. Those companies which have continued to deliver strong results have held up relatively well. Those companies which were priced as heavily valued growth stocks but then under-delivered are getting hit extraordinarily hard.”