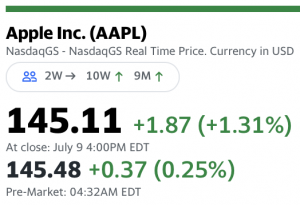 Treasuries resumed gains after snapping an eight-session rally Friday. They will remain in focus amid new supply coming to the market this week, as well as key U.S. inflation data and Federal Reserve Chair Jerome Powell’s semi-annual appearance before Congress. The dollar was steady against major peers.

Equities and bonds have rallied amid a decline in long-term interest rates and inflation expectations as central banks aren’t rushing to pull back support that has helped a recovery from the pandemic. Still, investors remain concerned about the spread of the delta variant and a slowdown in vaccination rates, while pondering when the Fed will start tapering stimulus.

“There does seem to be a complacency that Goldilocks is not only alive and well, but that it’s getting stronger by the day,” Simon Ballard, First Abu Dhabi Bank chief economist, said on Bloomberg Television. “Unfortunately, it has to be recognized that going forward, the longer that rates remain where they are, the more that we look toward tapering, the more severe and acute could be the reaction.”

Elsewhere, Asian stocks rose at the start of the week after China’s central bank moved to boost liquidity by cutting the amount of cash most banks must hold in reserve to buttress economic growth.