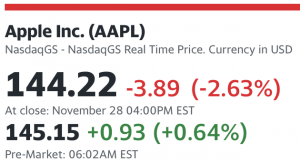 Apple (ticker: AAPL) rose 0.5% in premarket trading. The stock declined 2.6% in the previous session with the tech giant facing a potential iPhone production shortfall as protests continued to disrupt operations at the largest factory in China for major supplier Foxconn.

Apple could face at least a 5% hit to iPhone production this quarter and up to 10%, depending on production by Foxconn, according to estimates from analysts at Wedbush.

Walt Disney (ticker: DIS) rose 0.3% in premarket trading after Bob Iger told employees at his first company-wide town hall since retaking the reins of the entertainment giant that he would empower the company’s creative teams, chase profitability over adding streaming platform subscribers, and spend money where it would add value for the company.

Railroad stocks such as Union Pacific (UNP), CSX (CSX) and Norfolk Southern (NSC) were on watch Tuesday after President Joe Biden called on Congress to pass a law that would avert a rail shutdown.