From the Wall Street Journal’s " 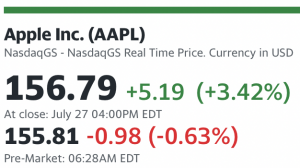 Stock futures ticked lower ahead of a bumper day of corporate earnings reports, including figures from some of the world’s biggest technology names, and data on U.S. economic growth.

Stock markets have started the third quarter in better form than the declines seen in the first half of the year. Corporate earnings haven’t been as bad as investors had feared, suggesting that soaring inflation and signs of flagging economic growth aren’t weighing too heavily on companies’ balance sheets.

Meanwhile, the Federal Reserve has signaled it is serious about bringing inflation down. On Wednesday it raised its federal-funds rate by 0.75 percentage point to a range between 2.25% and 2.5%.

Investors are looking to earnings figures from major blue-chip and technology companies Thursday for guidance. Pfizer, Comcast, Mastercard and Honeywell are among the firms set to report ahead of the opening bell. Tech giants Amazon and Apple are due to report earnings after markets close.

Ahead of the opening bell, Facebook-parent Meta Platforms fell more than 5% after reporting its first decline in revenue after hours Wednesday. Qualcomm declined nearly 4% after issuing a muted sales outlook. Ford jumped almost 6% after reporting a 50% rise in revenue. Online marketplace operator Etsy gained more than 6% after it reported better-than-expected results...

“The rally we have seen looks like a classic bear market rally, rather than the launch of a new bull market,” said David Donabedian, chief investment officer of CIBC Private Wealth US. “We are still going to have a period where inflation is uncomfortably high and growth is uncomfortably low and that is not a good backdrop.”

Charts: Yahoo!Finance sees a bullish price-crosses-moving-average pattern. Max pain moves up $1 to $150 with the same call mountain at $160 and put peak at $140.