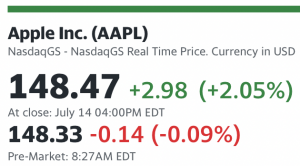 Investors are trying to assess how officials will balance the need to tame inflation with concerns over a potential recession. U.S. consumer inflation accelerated to 9.1% in June, a pace not seen in more than four decades, causing some traders to expect more aggressive interest-rate increases to tame it. At the same time, tightening of financial conditions could weigh on growth.

More than two-thirds of U.S. economic activity is tied to household spending. Recessions typically are accompanied by a pullback by consumers. Economists expect the Commerce Department to report that Americans’ retail spending rose in June, after declining in May, when figures are released at 8:30 a.m. ET.

The University of Michigan will publish an initial reading of its consumer-sentiment survey for July at 10 a.m. ET. Economists expect the report to show there was a slight improvement in consumer’s moods in July from June’s final reading, when it fell to its lowest point on record.

“Recession risks have risen since the beginning of the year,” said Mike Bell, global market strategist at J.P. Morgan Asset Management. “If we don’t get any signal of consumer retrenchment, maybe it’s not as bad as people fear, but if we do get that it’s a signal recession risk is materializing.”

Charts: Yahoo!Finance sees a neutral commodity-channel-index pattern. Max pain stays at $145 with the same call mountain at $145 and put peak at $135.