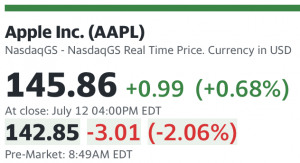 Investors are laser-focused on U.S. inflation data for June, due to be released at 8:30 a.m. ET. The fastest pace of consumer-price growth in four decades has upended financial markets this year by pushing the Federal Reserve to raise interest rates at a rapid clip.

The end of the central bank’s pandemic-era stimulus policies has dragged on the stock market, boosted yields on government and corporate bonds and sent the dollar higher. More recently, the Fed’s drive to tighten monetary policy has raised concerns of a looming recession.

“The inflation data look close to a peak in most of the major economies,” said Paul O’Connor, head of multiasset at Janus Henderson Investors. “But I think the central banks are going to want to see much more than that before they give the all clear.”

The consumer-price index is expected to have increased 8.8% in June from the same month last year, according to economists surveyed by The Wall Street Journal. That would mark an acceleration from the 8.6% recorded in May. Core inflation, which strips out volatile food and energy prices, is expected to slow to 5.7% from May’s 6% rate.

Charts: Yahoo!Finance sees a bullish fast-stochastic pattern. Max pain slips to $144 with a call mountain at $145 and a put peak at $135.