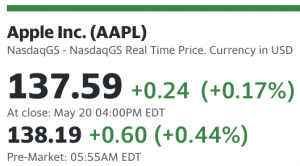 U.S. stock futures inched up, putting the S&P 500 on track to edge away from bear-market territory after flirting with such levels in a volatile trading session Friday...

Stocks have slid in recent weeks as investors debated how aggressively the Federal Reserve will raise interest rates to tame elevated inflation. Price pressures have eroded some corporate earnings, but money managers also worry that tightening financial conditions too much risks weighing on economic growth.

Inflation concerns were exacerbated in recent months as China implemented lockdowns to contain the spread of Covid-19, adding strain to supply chains. Russia’s war against Ukraine has also caused European countries to shift away from Moscow’s oil and gas, adding to prices.

“This year, we’re dealing with several issues, which in and of themselves would ordinarily be the top story in any given year,” said Hugh Gimber, a global markets strategist at J.P. Morgan Asset Management. “Yet markets are having to deal with them all at the same time.” This has lent to heightened volatility, he said.

Charts: Yahoo!Finance sees a commodity-channel-index pattern. Max pain is at $145 with a call mountain at $165 and a put peak at $135.