From "Apple Shows AR/VR Headset to Board in Sign of Progress on Key Project" posted Thursday on the Bloomberg: 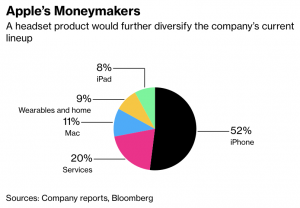 Apple Inc. executives previewed its upcoming
mixed-reality headset to the company’s board last week,
indicating that development of the device has reached an
advanced stage, according to people with knowledge of the
matter.

The company’s board, made up of eight independent directors
and Apple Chief Executive Officer Tim Cook, convenes at least
four times a year. A version of the device was demonstrated to
the directors during the latest gathering, said the people, who
asked not to be identified because the meeting was private.
In recent weeks, Apple has also ramped up development of
rOS -- short for reality operating system -- the software that
will run on the headset, according to other people familiar with
the work. That progress, coupled with the board presentation,
suggests that the product’s debut could potentially come within
the next several months.

The headset, which combines elements of virtual and
augmented reality, is Apple’s next big bet. It represents the
company’s first major new product category since the Apple Watch
in 2015 and would vault the tech giant into a still-nascent
industry -- one currently dominated by Facebook owner Meta
Platforms Inc. Apple is seeking new ways to expand its devices
business, which makes up about 80% of annual sales.
Apple has aimed to unveil the headset as early as the end
of this year or sometime next year, with a consumer release
planned for 2023. It targeted an introduction at the Worldwide
Developers Conference in June, but challenges related to content
and overheating have led to potential delays, Bloomberg has
reported.

My take: One step forward, one step back.