"Unfortunately the stock went back up, so I stopped." -- Warren Buffett

From Yun Li's "Buffett bought more Apple last quarter and says he would have added more if the stock didn't rebound" posted Monday on CNBC: 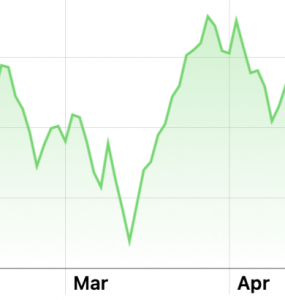 Warren Buffett bought the dip in his No. 1 stock Apple during the tech giant’s sell-off in the first quarter.

Berkshire Hathaway’s chairman and CEO told CNBC’s Becky Quick that he scooped up $600 million worth of Apple shares following a three-day decline in the stock last quarter. Apple is the conglomerate’s single largest stock holding with a value of $159.1 billion at the end of March, taking up about 40% of its equity portfolio.

“Unfortunately the stock went back up, so I stopped. Otherwise who knows how much we would have bought?” the 91-year-old investor told Quick on Sunday after Berkshire’s annual shareholders meeting.

My take: Dammit. Can't find the video anywhere -- even on CNBC Pro.