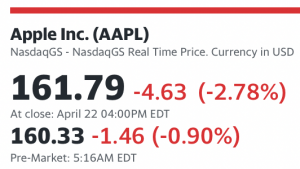 Investors are worried that strict policies China has in place to combat Covid-19 will further disrupt global supply chains. Continued disruptions to manufacturing and the movement of goods since the start of the pandemic have contributed to U.S. inflation reaching a four-decade high. New lockdowns in China and Russia’s war against Ukraine are likely to add to price increases...

“The problem with inflation is it can get embedded and we see inflation getting quite sticky,” said Sebastian Mackay, a multiasset fund manager at Invesco. “What we’re seeing is a combination of the war in Ukraine and the lockdown in China causing supply issues.”