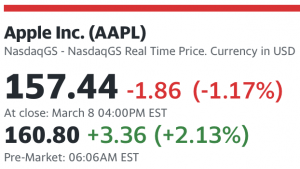 Oil prices fell, while U.S. stocks were poised to open higher, extending a volatile spell as investors track the economic fallout of the war in Ukraine...

The war in Ukraine has fueled big moves in stocks, commodities, currencies and bonds. For investors, analyzing the direction of the conflict, fast-changing sanctions by the West on Russia and their effects on the global economy is challenging. The turbulence has pushed the Nasdaq Composite into a bear market.

A surge in oil prices, given new momentum by the U.S. embargo on Russian energy, has raised concerns among money managers that sustained inflation and lower economic growth could collide. Major central banks were on track to begin tightening monetary policy before Russia invaded Ukraine. The European Central Bank is meeting this week. Federal Reserve Chairman Jerome Powell said last week that he planned to propose a quarter percentage-point rate increase at the central bank’s meeting this month.