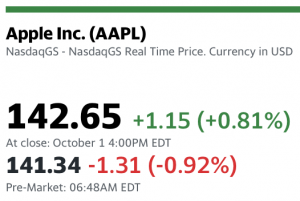 The stock market was under pressure Monday as a host of issues including U.S. political friction and a global energy crunch damped investor sentiment, while a trading halt on Evergrande shares made waves in Hong Kong.

Futures for the Dow Jones Industrial Average indicated an open 80 points lower, after the index rose 482 points Friday to close at 34,326. Futures for the S&P 500 and Nasdaq indicated a similar start to the trading week.

A familiar set of themes weighed on investor sentiment Monday. Analysts noted that the U.S. debt ceiling deadline in December and continuing political conflict over the $1 trillion infrastructure bill and $3.5 trillion reconciliation package muddied the waters.

“Inflation, the energy crisis, supply-chain issues, economic growth stuttering, concern that interest rates could go up sooner rather than later and China’s ongoing Evergrande debt problem remain at the forefront, clouding investment decisions and muddying the waters for anyone trying to make money on the market,” said Russ Mould, an analyst at broker AJ Bell.

NOTE: The current owner of Maximum-Pain.com responded to my queries about how their data are collected...