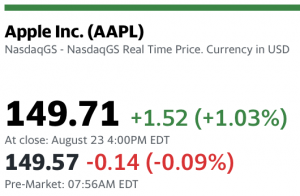 Stocks have been grinding higher as investors weigh strong corporate earnings and the economic rebound against the global surge in Covid-19 cases, which is prompting fresh restrictions in some markets. Money managers are also assessing whether the Federal Reserve may slow down plans to pare back its easy-money policies because of signs that economic growth may be slowing.

“Markets are struggling for direction a little bit after we have had a huge run,” said Mike Stritch, chief investment officer at BMO Wealth Management. “People are asking, what is the next catalyst to propel the market higher, or are the handful of risks that are out there enough to collectively give people a little more pause?” he said.

Comments from Fed officials at the central bank’s Jackson Hole Symposium later in the week may offer insights into the pace at which the central bank would taper bond purchases. Chairman Jerome Powell speaks virtually at the event Friday.

“I feel a little less convinced that there will be a major announcement coming up this week,” said Mr. Stritch. “I don’t know if now is the right time for the Fed to be overly aggressive,” he said.

My take: Apple has turned green, but so far it lacks Monday’s conviction.

UPDATE: Mr. Premarket doesn’t know which way is up.