“Investors should own them all, even if the regulatory headwinds take a while to abate.”

From Eric Savitz and Max Cherney’s “Big Tech has hit a perilous moment. It won’t last.” ($) posted early Friday on Barron’s Tech and on the cover of this week’s magazine: 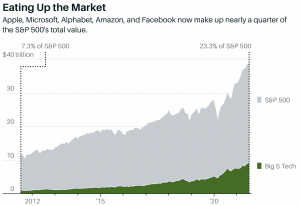 Over three days in late July, America’s tech giants put on an impressive show. Apple, Microsoft, Alphabet, Amazon.com, and Facebook had thrived in the pandemic, and their latest earnings reports hammered home the point. The five companies generated a combined $332 billion in revenue from April to June, up 36% from a year earlier. All of their profits were better than expected. The twist is that all of their stocks, save for Alphabet’s, sold off on the news.

The negative reaction reflects the paradox surrounding America’s Big Tech complex. Their products are being used more than ever, just as the companies have become increasingly disliked. Regulators and lawmakers—cheered on by a bipartisan mix of constituents—are scrutinizing each business and threatening significant actions to curtail their power. Evercore ISI analyst Mark Mahaney estimates that the regulatory scrutiny has already created a 10% drag on large tech stocks…

Big Tech has hit a perilous moment. It won’t last. The five megacaps still have the best business models on the planet, and their stocks look relatively cheap. Investors should own them all, even if the regulatory headwinds take a while to abate.

Taken together, the five tech giants—the largest companies in the U.S. stock market by a wide margin—offer a way to invest in the global economy’s most important trends: digital transformation and cloud computing, and the future of communication, entertainment, commerce, and work.