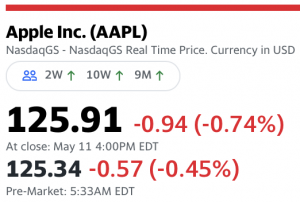 U.S. stock futures slipped Wednesday, pointing to the Dow extending its decline a day after its biggest drop since February, as investors awaited fresh inflation data that could test their appetite for shares and bonds...

Signs of mounting inflation have weighed on stocks this week. Rising commodity markets, supply-chain blockages and hiring difficulties have prompted some investors to expect a prolonged upswing in consumer prices.

That could lead the Federal Reserve to raise its target for short-term interest rates sooner than it has signaled, potentially weighing on stocks and other assets that have benefited from over a year of near-zero borrowing costs. For their part, several Fed officials have said theeconomy still needs support from low rates.

Concerns that a burst of inflation may prove more intense and longer-lasting than investors had expected have sharpened focus on inflation data for April, due to be published at 8:30 a.m. ET. Economists surveyed by The Wall Street Journal expect the consumer-price index to have jumped 3.6% last month from a year earlier, up from 2.6% in March. That would be the highest 12-month level since the summer of 2011.

“Markets are highly sensitive to headline and core levels of inflation at this moment in time,” said Edward Park, chief investment officer at U.K. investment firm Brooks Macdonald. “There is the concern that the Federal Reserve will lose control if there are signs that the inflation backdrop does become more prolonged.”

My take: The bleeding is slowing.