Apple's iPhone 11 launch: What the analysts are saying

So far, nothing but tailwinds across the board.

Excerpts from the notes I've seen. More as they come in.

Michael Olson, Piper Jaffray: iPhone User Survey Suggests Higher Demand for Lower Priced Models. Apple released this year's slate of iPhones on Friday (9/20) and our survey of U.S. iPhone owners points to higher demand for lower priced devices this year. The survey results are consistent with our expectations, as we expect FY20 will prove to be a "transition" year for iPhone ahead of 5G devices coming late next year. In other words, we believe users upgrading their iPhone in the coming 12 months are less likely to buy a higher-end model with the promise of 5G devices on the horizon. As a result, we model iPhone revenue down -1% y/y, which is also in-line with consensus. For the remainder of FY19 and into FY20, we expect limited excitement around the iPhones shipped last week, however, as long as services revenue and non-iPhone devices continue to perform well, this should tide investors over until anticipation for 5G iPhones intensifies. Overweight. $243..

Daniel Ives, Wedbush: iPhone 11 Launch Day Strong Out of the Gates; Defying the Skeptics. We have spent most of the day at Apple's Flagship NYC store where Cook was earlier this morning to kick off launch day for the trifecta of iPhone 11s hitting the shelves around the world. Demand looks strong out of the gates for Apple as the lines at its flagship NYC store were up ~70% today compared to what we saw last year based on our analysis. Given our conversations with customers in line today we believe there is strong demand for the base iPhone 11 version, as well as the 256GB iPhone 11 Pro in both the Space Grey and Gold colors. To this point, lines were unwavering into the afternoon which is a positive data point for Cupertino as last year we witnessed the crowds start to quickly dissipate after the morning rush. Outperform. $248.

Matthew Cabral, Credit Suisse: Pro / Max solid out of the gate, iPhone 11 better y/y but mixed by geo. Apple’s new iPhones began shipping today and through this morning wait times for the iPhone 11 Pro / Pro Max are extended by ~1-2 weeks y/y nearly across the board while lower-priced iPhone 11 wait times remain mixed by geography. Other key observations include: (1) Wait times are longer for the iPhone Pro / Pro Max than the iPhone 11 in most markets, similar to last year and fitting with the pattern of higher-end users more likely to buy early in the launch cycle; (2) 83% of iPhone Pro / Pro Max SKUs tracked have lead times beyond 3 weeks (all regions ex-China/Canada at 2-3 weeks); during last year’s launch cycle we never saw lead times extend past 2-3 weeks for any SKU ex-Canada; (3) iPhone 11 demand remains mixed by geography, with >1 week longer lead times y/y in the US and China, while Europe/Japan/Hong Kong remain more generally available; and (4) In China, lead times for all SKUs are up >1 week y/y, a solid early indicator for demand in what had been the primary source of volatility last year. Neutral. $209.

Gene Munster, Loup Ventures: iPhone Launch Day Line Survey: Cycle Off to a Solid Start. The line at the 5th Ave store in New York was 89% longer than it was in 2018 for the iPhone XS and XR launches combined. We also surveyed five Apple Stores in the Minneapolis metro area, where the lines were, on average, 20% longer than last year's combined launches. 82% of respondents were buying an iPhone 11 Pro or Pro Max. While the line waiters are generally Apple fanatics that tend to opt for the higher-optioned devices, we were expecting 70% to opt for the Pro models. This is a sign that the new camera system and battery appear to be enough of an upgrade to keep loyal Apple fans engaged.

Katy Huberty, Morgan Stanley: Latest iPhone Data Points. We believe that the trajectory of iPhone demand is improving in the September quarter and see more upside than downside risk to our September quarter iPhone shipment estimate of 43M (-8% Y/Y). Below we present [one of] three August 2019 data points, as well as recent iPhone 11 pre-order data as evidence to support this view. Overweight. $247. 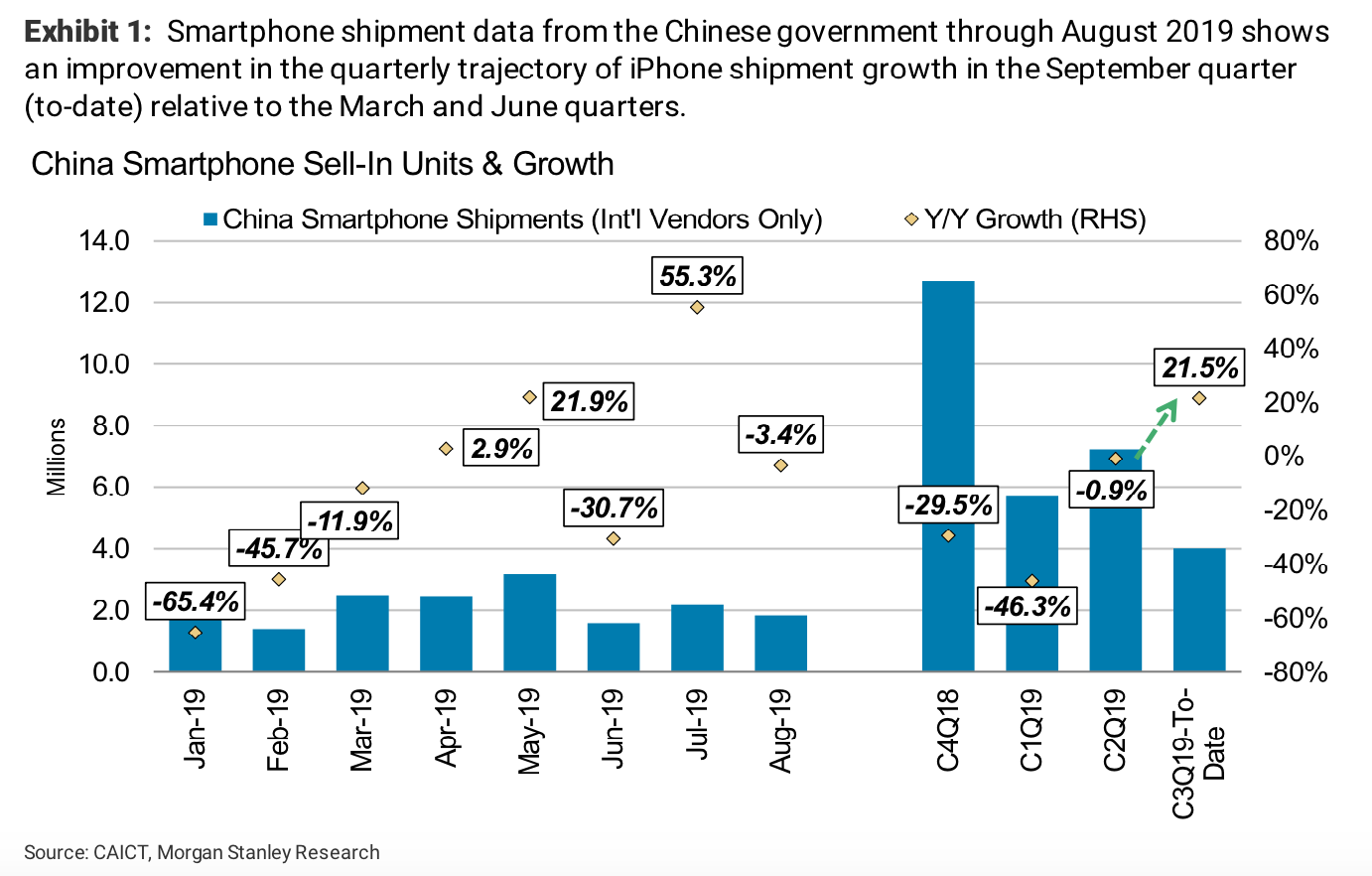