What’s Apple got to show for a 5X increase in R&D?

Bernstein’s Toni Sacconaghi looks at Apple’s pace of innovation and wonders where $12.7 billion in annual R&D spending is going.

From a note to clients that landed in my inbox Friday:

While some companies acquire new technologies via [mergers and acquisitions] M&A rather than R&D spend, we note that Apple’s M&A spending has also lagged peers. Apple has deployed just 2% of its [free cash flow] FCF towards M&A – dramatically lower than peers at ~25%. Collectively, the combination of low R&D spending and low M&A suggests that Apple may be “underinvesting” in innovation.

Perhaps most importantly, despite R&D spending more than quintupling over the last 6.5 years, Apple’s pace of new product/services introductions does not appear to have accelerated. We note that Apple cumulatively spent $11.5B between 1998 and 2011, a period in which it introduced the iPod, iPad, and iPhone – last year alone, Apple spent a similar amount. We believe that Apple’s R&D productivity has declined (which is not uncommon as companies scale, but may also be attributable to the loss of Steve Jobs). That said, it is also possible that the recent surge in R&D spending could translate into accelerated product and services announcements in the near to medium term. 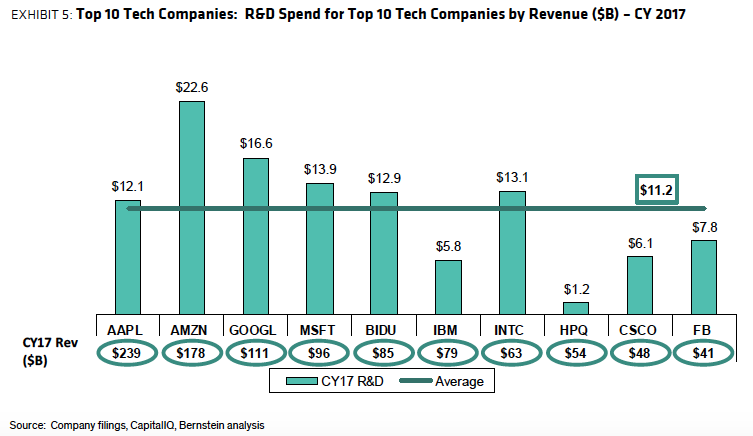 My take: The efficiency with which Apple under Steve Jobs turned R&D dollars into cash-generating product was once the envy of the industry. To quote Horace Dediu:

Creating products is very cash efficient. For example, the iPhone–the most successful product of all time–cost almost nothing to develop; certainly nothing that required Apple to dip into its cash. Funding for the type of product development Apple does comes from existing cash flows and mostly consists of salaries for their employees.

I’m with Sacconaghi on this one. Either that efficiency has suffered greatly under Cook & company, or something great is coming.