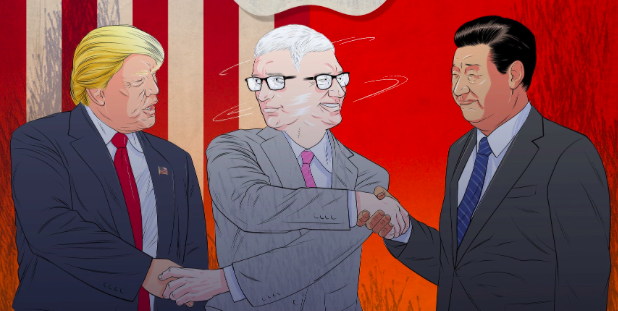 As trade tensions rise, no U.S. company has more at stake in China than Apple

The Trump administration has told Mr. Cook that it would not place tariffs on iPhones, which are assembled in China, according to a person familiar with the talks who declined to speak on the record for fear of upsetting negotiations. But Apple is worried China will retaliate in ways that hamstring its business, according to three people close to Apple who declined to be named because they were not authorized to speak publicly.

Apple fears “the Chinese-bureaucracy machine is going to kick in,” meaning the Chinese government could cause delays in its supply chain and increase scrutiny of its products under the guise of national-security concerns, according to one person close to the company. Apple has faced such retaliation before, another person said.

Months later, Chinese regulators delayed approvals of the iPhone 6 for additional security reviews. Apple executives perceived the moves as retaliation, said people familiar with the matter, which has not been previously reported.

My take: Some good reporting here. As for how Tim Cook became tech's top diplomat, it boils down to a lot of high-level schmoozing on both sides of the Pacific. Curiously, Cook is said to find Trump's cabinet more accessible than Obama's. Larry Kudlow, Steve Mnuchin and Wilber Ross are singled out as bffs. Others, not so much. Quoth the Times:

He has met with Robert Lighthizer, the United States trade representative, but they tend to disagree on trade issues, this person said, and he has avoided engaging with perhaps the administration’s most hawkish member on trade, Peter Navarro, a top adviser to the president.

UPDATE: Speak of the devil. From CNBC:

Peter Navarro said Tuesday he has no knowledge of an exemption for Apple's iPhones in U.S. trade talks with China.