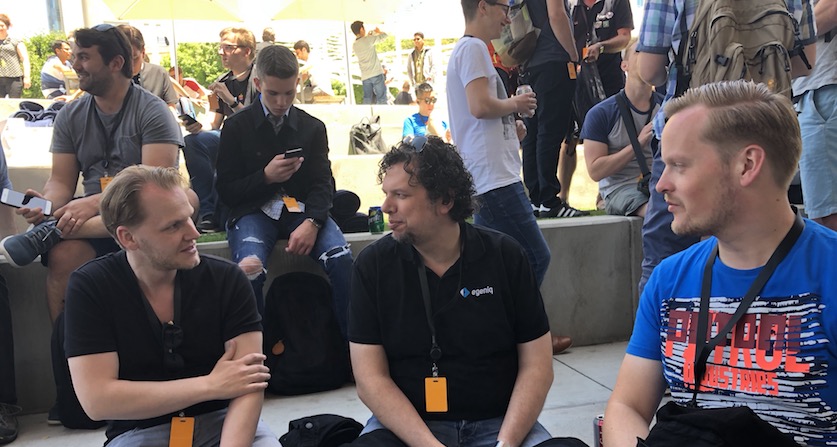 I've been chatting-up developers in the food line.

I asked them if they were happy. A couple guys with Russian accents said they were. They liked dark mode and the new kits (ML and AR). Another guy, from Microsoft, liked the app store redesign.

Craig Federighi's hint that there would be, maybe next year, a path to migrate iOS apps to MacOS got a nod or two. But nobody I met had any plans to take that path. Why would you move from a huge installed base—the world's most profitable—to one that's orders of magnitude smaller, and shrinking?

Apple may have killed a few developers today. Bitmoji, Zelle, AirMeasure were mentioned as companies at risk being trampled underfoot. And with Walkie-Talkie, Apple sucked the oxygen out of what might have been—with better APIs—a whole category of third-party money makers.

Asked if anybody was disappointed, Eli Sapir, CEO of Apptopia, stepped right up. "I'm disappointed in everything!" he said. "There was no improvement in the core apps—Phone, Contacts, Calendar—the apps that everybody uses. Instead we get useless things like Animoji and f...ing Memoji that nobody uses."

Others defended Apple. There are good business reasons, I was told, for the company to move into spaces currently occupied by popular millennium apps like Snapchat.

But that's what I call feature-matching, which is not quite the same thing as innovation.