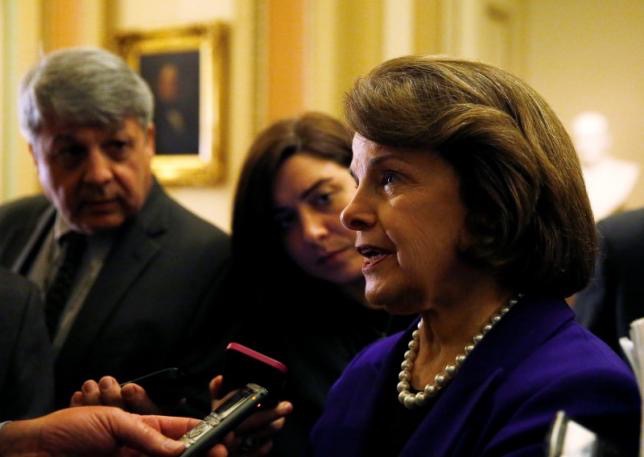 Why This California Democrat Backs the FBI Over Apple

Silicon Valley executives who threw their support to Apple in its standoff with the FBI may be surprised to see their senior U.S. senator, Dianne Feinstein, co-sponsoring a bill that would force Apple to comply with the bureau's court order.

Feinstein, the highest ranking Democrat on the Senate Intelligence Committee, is one of the National Security Agency's best friends in Washington.

After Edward Snowden's 2013 revelations of NSA mass surveillance, Feinstein came to the spy agency's defense, calling Snowden a "traitor" and writing legislation that would establish a legal framework for the NSA's surveillance program.

Her FISA Improvements Act met fierce opposition. Republicans on the Intelligence Committee complained that it would "codify the government's authority to collect the phone records of huge numbers of law-abiding Americans, and also to conduct warrantless searches for individual Americans' phone calls and emails."

The American Civil Liberties Union and the Electronic Frontier Foundation were among 54 public interest groups urging opposition. The ACLU called it a "dream come true for the NSA." The EFF called it a "fake fix" that would "permanently entrench" invasive surveillance practices.

Among its loopholes, according to critics, was a "backdoor search provision" that would give domestic U.S. law enforcement agencies warrantless access to the data collected by the NSA.

Wisconsin Republican Sen. Jim Sensenbrenner, co-sponsor of the USA Freedom Act that required warrants for such searches, called Feinstein's bill an effort "for the first time in our country's history to allow unrestrained spying on the American people."

Feinstein's new bill, co-sponsored by Sen. Richard Burr (R-N.C.), has been sent to the White House for its reaction.

Feinstein says she doesn't know how it will be received.

“It’s obviously controversial, so I can’t tell you,” she told The Hill. “It’s just that I have a basic fundamental belief this is very important and that no American company should be above the law.”