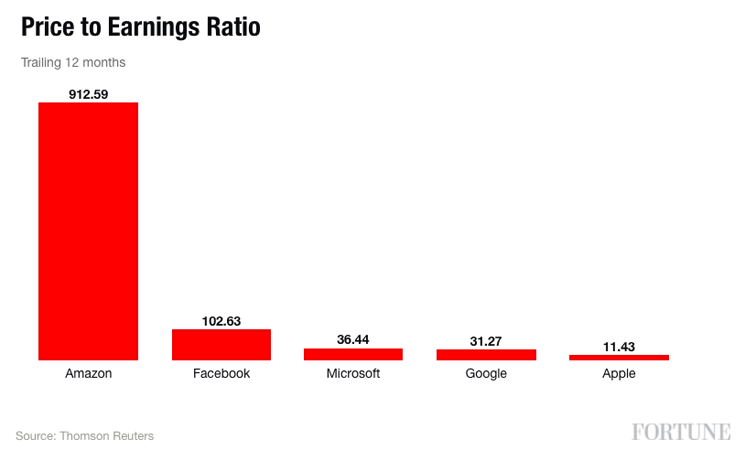 Apple's Bizarre Valuation: Something's Got to Give

Two things are remarkable about the chart above, which compares the value of five leading tech companies by the securities market's most fundamental measure: P/E (price per share divided by earnings per share over the past 12 months).

One remarkable thing is that Amazon's P/E fits into the chart, something it does only in years when the company turns a profit. CEO Jeff Bezos' preference is to pour whatever cash his virtual storefront generates into assaults on new brick-and-mortar markets. When Amazon's earnings are zero or negative—as they often are—the company's P/E ratio zooms to infinity.

Another remarkable thing is how far out of whack is Apple's P/E compared with the four horsemen of tech.

Amazon, by today's valuation, is worth 80 Apples. Facebook is worth nine. Microsoft  and Google are each worth roughly three.

"Something," wrote Jean-Louis Gassée in this week's Monday Note, "will have to give."

One more chart, while I have your attention. It compares the same five companies by the billions of dollars in cash they generated in their most recent fiscal year. It is almost the reverse of the P/E chart. Apple generated 11 times as much cash as Facebook, eight times Amazon, and three times Google and Microsoft. "One of the big four will falter in 2016," predicts Fred Wilson, one of New York's most prominent venture capitalists (Twitter, Tumblr, Kickstarter, etc.), without specifying which four companies he means.

I'm just a lay observer, but it seems to me that if the market reflected reality, any faltering this year would be more likely to come from Amazon's end of spectrum, where the P/Es are high and cash flow—at least compared with Apple—relatively low. Querying Wilson for his analysis.