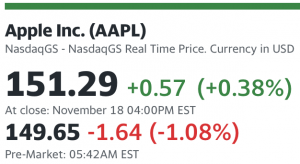 Stock futures fell Monday ahead of another batch of retail earnings to kick off a shortened week for the Thanksgiving holiday...

Disney bucked the negative trend, however, rising more than 8% after the media giant announced that Bob Iger would return as CEO, effective immediately.

Investors have been reflecting on the strength of a recent bear market rally, which kicked off earlier in the month with the October consumer price index reading and gained some steam with last week’s reading on wholesale prices. Traders last week were hung up on messaging from Federal Reserve officials, who were less impressed with the figures and reassessed their optimism around the possibility of slowing inflation.

Ed Yardeni of Yardeni Research said that in his view, the Oct. 12 low was the bottom and the S&P 500 could rise to near 4,300 by the end of the year, he told CNBC on “Closing Bell: Overtime” Friday night. The benchmark index currently sits at 3,965.34.

“What’s making the big difference in the market is the resilience of the economy, it’s been spectacular,” he said. “Everyone’s been debating whether we’re going to have a soft landing or a hard landing – meanwhile, there’s no landing whatsoever. The consumer didn’t get the recession memo and they keep spending.”