Apple is backing off plans to increase production of its new iPhones this year after an anticipated surge in demand failed to materialize, according to people familiar with the matter.

The Cupertino, California-based electronics maker has told suppliers to pull back from efforts to increase assembly of the iPhone 14 product family by as many as 6 million units in the second half of this year, said the people, asking not to be named as the plans are not public. Instead, the company will aim to produce 90 million handsets for the period, roughly the same level as the prior year and in line with Apple’s original forecast this summer, the people said. 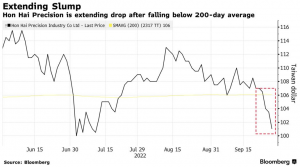 Apple shares fell as much as 3.3% in pre-market trading on Wednesday. US stock-index futures also turned lower after the news, with contracts on the Nasdaq 100 down as much as 1.5%.

It's worth unpacking this scoop from @debbywuintaipei and @6d6f636869 for what it does -- and doesn't -- say about iPhone demand. Apple is backing off an aspirational target of making as many as 96 million iPhone 14 devices this year ...https://t.co/SSIiHM1UOE via @technology