How Apple benefits from the baseball brouhaha

Well, whether frustratingly lucky for The YES network or Yankee fans, Judge didn’t hit his 61st and record tying home run while on Apple TV+.  But Apple got plenty of viewers and it will be interesting if Apple got a lot of new Apple ID’s or at least tons more checking in on the streaming broadcast. 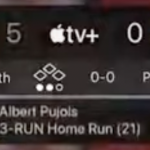 But Apple TV+ (and LA Dodgers fans in attendance) REALLY got its Friday Night MLB Baseball money’s worth with the evening St. Louis Cardinals vs LA Dodgers game and Albert Pujols’ historic #699 AND #700 home runs off Dodgers’ pitching.  EVERY replay shown worldwide on news and sports channels, and on YouTube - Twitter - Facebook will have the Apple TV+ logo in it for eternity. So even though my LA Dodgers didn’t put up much of a fight, they and Apple TV+ were part of history making today with Albert Pujols.

My take: If you missed the brouhaha, here's a rundown from The Verge