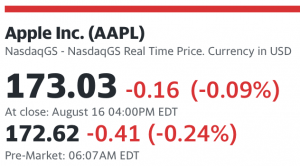 U.S. stock futures edged lower as investors awaited another batch of earnings from retailers and minutes from the Federal Reserve’s July meeting.

Stocks have mounted a furious climb higher recently as investors reassessed expectations that inflation and an economic slowdown could keep share prices falling this year. The S&P 500 has jumped 17% from its June low as investors have reshuffled portfolios and scrambled to cover bearish wagers.

A series of strong earnings reports, as well as data last week showing U.S. inflation eased in July, have spurred much of the recent optimism. Lowe’s shares inched higher premarket after it reported quarterly earnings, following strong results Tuesday from Walmart and Home Depot. U.S. retail sales data are also due before the opening bell. Later Wednesday, earnings are due from companies including Cisco Systems and Bath & Body Works.

Minutes from the Fed’s recent meeting, due at 2 p.m. ET, could offer more details about the pace of future interest-rate increases. Federal-funds futures, used by traders to place bets on the course of rates, recently showed expectations were almost evenly split on the possibility of a 0.5- or 0.75-percentage-point interest-rate hike in September, according to CME Group. Investors are pricing in a 49% chance that the Fed acts more aggressively with a 0.75-percentage-point increase, the data show, up from 41% Tuesday.

“We’re all waiting for the Fed minutes,” said Florian Ielpo, head of macro at Lombard Odier Investment Managers. “Like everyone, I’m scratching my head about whether we are experiencing the comeback of a bull market, or if it is just a bear-market rally.”

Charts: Yahoo!Finance sees a triple-moving-average-crossover pattern. Max pain stays at $160 with a call mountain and put peak both bizarrely still at $145.

UPDATE: Some time this morning the MaxPain website corrected itself. The call mountain is now reported to be at $177.50, which makes a lot more sense and reflects what the chart actually shows.