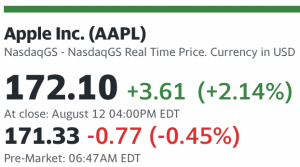 U.S. equity futures were lower Monday, putting Wall Street on track to take a breather after another positive week, as traders braced for big retail earnings...

Last week the S&P 500 advanced 3.25% to notch its fourth positive week in a row and its longest winning streak since 2021. The Nasdaq Composite ended the week 3.08% higher, also for its fourth straight week. The Dow added 2.9%.

The gains came after economic data showed inflation pressures could be easing a bit. The consumer price index was flat from June to July, the producer price index showed a surprise decline and import prices fell more than expected.

That helped relax investors that have been eager to call the mid-June lows the bottom of the cycle. Just as many have been quick to call out that the data from one month doesn’t necessarily make it a reliable trend.

“While bulls may be chalking this week up as another win for an equity rally that has remarkably lasted almost two months since June’s lows, bears continue to pound the table on risks to year-end earnings and margins that could spoil the party for those celebrating too early,” Morgan Stanley said Sunday.