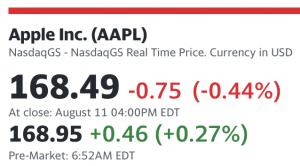 Stocks were poised to close out a fourth weekly advance, extending a rally driven by signs of a slowdown in inflation.

Investors hope a recent deceleration in consumer-price growth will encourage the Federal Reserve to raise interest rates at a slower pace, which in turn could prevent the economy from tipping into a recession. Lower rates have in recent years boosted prices for stocks, bonds and more speculative assets such as cryptocurrencies.

Still, many money managers caution that it is too soon to say the Fed will ease up in its campaign to quell inflation. Wild cards remain, such as the energy crisis unfolding in Europe, which could boost energy prices globally.

Futures for the S&P 500 added 0.5% Friday, putting the benchmark stocks gauge on track for its longest winning streak since one that ended in early November. The S&P 500 has risen 1.5% for the week so far. Futures for Dow Jones Industrial Average and technology-focused Nasdaq-100 also advanced...

Samy Chaar, chief economist at Lombard Odier, said several factors point to slowing inflation, including a fall in shipping rates and decline in global commodity prices. Another risk that had weighed on stocks—the downturn in China’s economy—also seems to be improving, Mr. Chaar said.

“The big question here is: Is it morphing into a more fundamental kind of rally?” Mr. Chaar said, after the initial pickup in stocks was driven by a rebound from depressed levels.