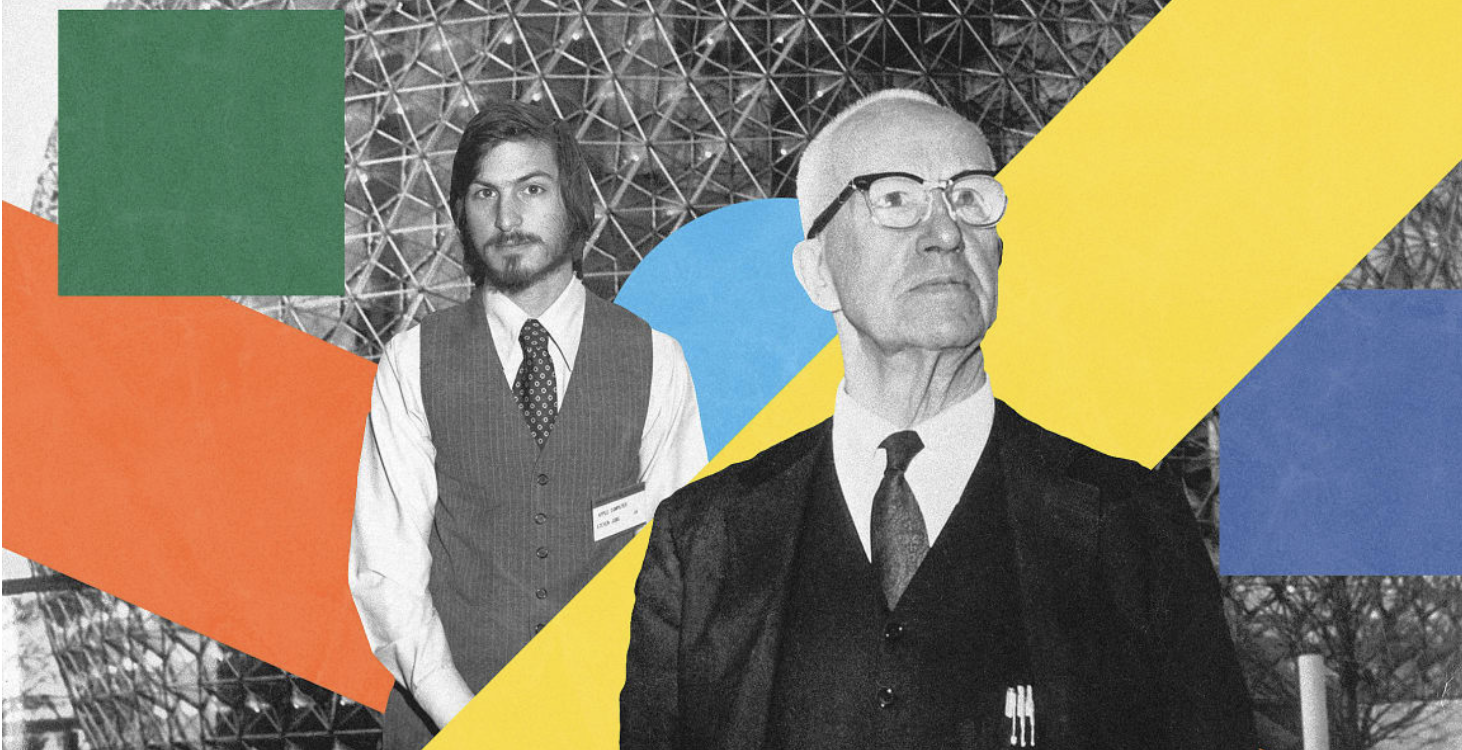 From Alex Nevala-Lee's "What Steve Jobs learned from Buckminster Fuller during their only meeting" posted Tuesday by Fast Company:

Fuller, 85, was dressed in the dark suit that he favored for all of his public appearances, and, in person, he was startlingly small. His driver’s license may have said that he was five foot six, but he had been about two inches shorter even in his youth, and his stature had been diminished by age. He had a huge, bald head with white hair trimmed almost to the scalp, a large hearing aid, and black, plastic glasses that magnified his hazel eyes into soft, enormously deep pools...

No one would ever know what [Jobs] and Fuller said to each other in private at Apple, which was only months away from its initial public offering...

For his part, Fuller was unconvinced that the personal computer would enable his lifelong vision of access to information. “He didn’t believe it,” [documentary filmmaker Taylor] Barcroft recalled. “He thought that only mainframes could do that work.” Fuller had devoted his career to predicting the impact of technology, but he saw nothing special in Apple: “I remember him saying that he thought the computer was a toy.”

Judging from his eagerness to meet Fuller, their encounter left a greater impression on Steve Jobs... Since the ’60s, college campuses had found an unlikely hero in Fuller, whose reputation as an inventor was based on the geodesic dome, a hemispherical structure used in everything from industrial buildings to hippie communes, as well as the sculpture studio at Reed. He had been given a crucial push by the Whole Earth Catalog, an oversized guide to books and tools for the counterculture that Jobs... described as “one of the bibles of my generation.”

One of the 17 icons [in the Think Different poster series] was Buckminster Fuller, who had been featured at the request of Jobs himself.

Excerpted by Fast Company from Nevala-Lee's "Inventor of the Future: The visionary life of Buckminster Fuller."

My take: This story is like donut, a sweet piece of dough with a hole in the middle. To be fair, however, it was plucked from a book about Fuller, not Jobs.