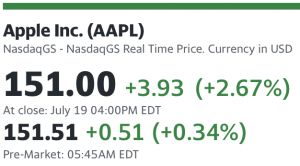 U.S. stock futures edged up on the back of earnings reports that were interpreted by investors as positive signals about the economy...

Stocks have swung in recent days, buffeted by earnings season which has been scrutinized for signs about how the highest inflation in more than four decades and slowing economic growth are affecting companies. Recent reports from companies such as Goldman Sachs and Citigroup came in above Wall Street’s expectations, even though both banks reported declines in profit.

“Earnings have been supportive of the narrative that growth isn’t falling off a cliff,” said Fahad Kamal, chief investment officer at Kleinwort Hambros. “It doesn’t necessarily look like a recession is coming.”

Charts: Yahoo!Finance sees a bullish slow-stochastic pattern. Max pain stays at $145 with a call mountain at $155.