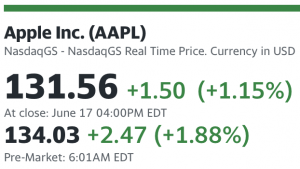 U.S. stock futures climbed, offering investors a reprieve from a recent stretch of whipsaw trading that had sent stocks and cryptocurrencies falling…

Investors’ appetite for riskier assets on Tuesday follows a tumultuous week in the markets, sparked by the Federal Reserve’s approval of a 0.75-percentage-point interest-rate increase, the largest since 1994. That sent investors scrambling to unload riskier assets amid growing fears that central bankers will plunge the U.S. economy into a recession. The benchmark S&P 500 finished the week 5.8% lower, its largest one-week decline in more than two years.

Government leaders and officials in recent days have tried to assuage an increasingly jittery nation that an economic slowdown isn’t guaranteed as central bankers work to tame decades-high inflation. President Biden on Monday said he spoke with Lawrence Summers, a former Treasury secretary, and reiterated that he doesn’t see a recession as inevitable. Federal Reserve Bank of St. Louis President James Bullard also said the economy appears on track for more expansion this year.

Still, few investors are willing to call a bottom to a selloff in the markets that has dragged the S&P 500 down 23% this year. Many say they view market turbulence, such as the kind seen last week in the markets, as buying opportunities.n updated yet.