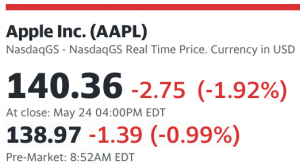 U.S. stock futures declined ahead of the release of minutes from the Federal Reserve’s most recent policy meeting, which will be combed for details on the path of coming interest-rate rises…

Stocks have had a volatile start to the week, buffeted by concerns about the Federal Reserve tightening monetary policy to combat the bout of high inflation and how sharp of a slowdown in growth it could cause. The S&P 500 is down nearly 18% from its last record high in January and briefly fell into a bear market last Friday before paring losses.

“It’s been really volatile, to say the least. This is linked to the question of recession, whether that’s coming or not. That’s effectively what the market has been pushing and pulling between,” said Fahad Kamal, chief investment officer at Kleinwort Hambros.