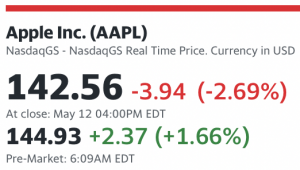 U.S. stock futures rose, suggesting markets could stage a relief rally at the end of a punishing week of losses across major indexes…

The moves higher in the U.S. market followed a late-session rally on Thursday that helped the Nasdaq Composite eke out a gain. Risk-on sentiment carried into international stock markets overnight. By Friday morning in the U.S., investors were scooping up shares of beaten-down technology companies before the opening bell

Investors described the rebound as a reprieve from a market selloff that has put all three major U.S. indexes on pace for their worst week since late January. As of Thursday’s close, the Nasdaq Composite was down 6.4% this week. The Dow, meanwhile, is on pace to fall 3.6% and extend its losses into a seventh consecutive week—its longest losing streak since 2001.

“This might just be a buy-the-dip rally and a dead-cat bounce than anything else,” said Greg Swenson, founding partner of Brigg Macadam, a London-based investment bank. Looking ahead, he said, he sees further losses for the U.S. stock market. “Even great companies are going to be suffering with the market.”