From Henry Suttmeier’s “Where To Buy Apple On Continued Downside Risk” posted Wednesday afternoon by Forbes:

Shares of Apple failed to hold its 200-day simple moving average at $159.70 on May 5. The downside risk is to its annual value level at $141.26. Blocking the upside is its semiannual pivot at $163.16. The weekly chart has been negative since the week of April 22 as a major warning… 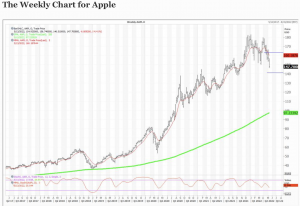 The weekly chart for Apple is negative with the stock below its five-week modified moving average at $160.04. The horizontal lines are the annual value level at $141.26 and the semiannual pivot at $163.16. The 200-week simple moving average or “reversion to the mean” is at $97.23.

My take: “Death cross” is not nearly as spooky as it sounds. From Investopedia’s “What is a Death Cross?“…

Despite its ominous name, the death cross is not a market milestone worth dreading. Market history suggests it tends to precede a near-term rebound with above-average returns.