5 months ago
Published May 6, 2022 by Philip Elmer-DeWitt 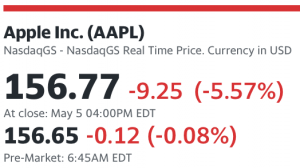 U.S. stock futures edged down, putting major indexes on track to extend losses after one of Wall Street’s worst selloffs since the pandemic began...

Stocks have been whipsawed in recent days as investors have tried to gauge what impact the Federal Reserve’s plan to raise interest rates will have on the economy. Investors are caught between competing hopes: that rate increases will be significant enough to tame rapidly rising inflation, but not so large that they will derail economic growth.

“The market is trying to balance whether central banks are more worried about inflation or about dampening growth and the market has clearly decided they are more worried about inflation,” said Altaf Kassam, head of investment strategy for Europe, the Middle East and Africa at State Street Global Advisors. “If the Fed is going to be fighting inflation at all costs then it will certainly have an impact on stocks.”

Charts: Yahoo!Finance sees a price-crosses-moving-average pattern. Max pain moves up to $162.50 with a new call mountain at $170.