3 months ago
Published May 5, 2022 by Philip Elmer-DeWitt 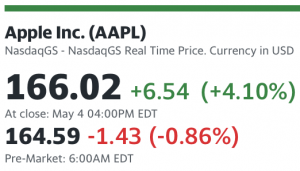 U.S. stock futures fell, with technology stocks on track to lead losses after the opening bell, as investors assessed the implications of Fed’s most aggressive tightening of monetary policy in more than two decades...

The pullback came one day after major U.S. stock indexes soared, with the Dow climbing more than 900 points, its biggest one-day gain since 2020. On Wednesday, central bank officials approved a half-percentage-point interest rate increase, lifting the federal-funds rate to a target range between 0.75% and 1%. But it was Fed Chairman Jerome Powell’s comments that energized markets after he said officials weren’t actively considering raising rates by three-fourths of a percentage point, or 75 basis points, at its June meeting.

Mr. Powell’s comments offered relief to investors who had become increasingly fearful that the Fed could raise interest rates too far, too fast and eventually tip the economy into a recession.

But by Thursday, investor optimism had begun to wane. Even with a larger interest-rate increase off the table in the coming months, investors are still facing the most aggressive tightening of U.S. monetary policy since 2000—the last time the central bank last raised rates by a half-point. Many investors are now questioning how high the Fed might raise rates over the next two years and how that might ripple across the economy and corporate profits.

Charts: Yahoo!Finance sees a bearish double-price-crosses-moving-average pattern. Max pain has fallen to $160 below call peaks at $165, $170 and $175.