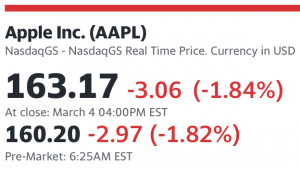 U.S. stock futures and global equity indexes dropped as the threat of a potential ban on Russian oil imports spurred a surge in energy prices that investors worry could smother economic growth, especially in Europe...

The war in Ukraine, now in its 12th day, has roiled commodity markets, increased tensions between Moscow and the West and led to Russia being unplugged from much of the global financial system.

Oil prices soared, with global benchmark Brent crude jumping 5.7% to $124.87 a barrel. Earlier Monday, it topped $130, the highest level since July 2008. The U.S. equivalent, West Texas Intermediate, rose 5.8% to $122.46. The U.S. and European partners are discussing a ban on imports of Russian oil, Secretary of State Antony Blinken said Sunday. A European gas benchmark surged 38% to a record high.

Rising oil prices are triggering fears about demand destruction and a global recession, said Michael Hewson, chief markets analyst at CMC Markets. “It’s hard to see much in the way of significant upside for stock markets now against a backdrop of continued escalation” in Ukraine, he said.

Charts: Yahoo!Finance sees a bearish crosses moving average pattern. Max pain has moved up to $170 with call and put maxima also at $170.