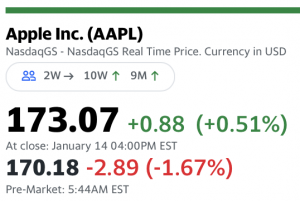 Futures tracking the tech-heavy Nasdaq 100 index (.NDX) slumped almost 2% on Tuesday as traders returned from a long holiday weekend to position for a more hawkish Federal Reserve ahead of a policy meeting next week.

Rate-sensitive technology stocks came under pressure in Europe and Asia as two-year Treasury yields , which track short-term rate expectations, crossed 1% for the first time since February 2020.

Frankfurt-listed shares of U.S. megacap tech companies including Google’s Alphabet, Apple, Amazon and Microsoft were last down between 1.9% and 2.5%. They were down by similar amount in early U.S. premarket trading.

Charts: Yahoo!Finance sees a neutral commodity channel index pattern. Max pain has plummeted to $150 from Friday’s $172.50 with a call peak at $170 and a lot of heavy put activity between $130 and $150. The put-to-call ratio is 1.18, the first time it’s been over 1 since I’ve been tracking it. Fasten your seatbelts.