Premarket: Apple is green. Set to open at record high. 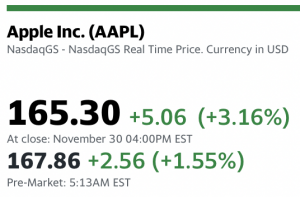 U.S. stock futures and oil prices rose, suggesting markets would claw back some losses sparked by worries over the Omicron variant and the unwinding of Federal Reserve stimulus.

Investors have little to go on as they assess whether the variant will lead to renewed restrictions in the U.S. and elsewhere and, if so, how governments and central banks would respond to support the economy. Though drugmakers have said the variant first identified in southern Africa looks like it could make existing vaccines less effective, they expect to be able to update the shots. Investors say a return to full-scale lockdowns is unlikely.

The uncertainty has led to seesaw moves in global markets that extended into Wednesday. Futures for the S&P 500 rose 1.2%, signaling gains for the benchmark index. The S&P 500 fell 1.9% Tuesday, closing out a decline for November after a late-month dive sparked by the emergence of Omicron.

“We just don’t know how much more infectious it is, how severe the symptoms are and what the impact of that is,” said Sebastian Mackay, a multiasset fund manager at Invesco. “What I’d assume now is this probably isn’t enough to derail the recovery that’s going on.”