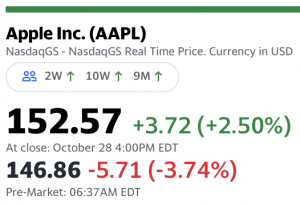 Shares of Apple AAPL, +2.50% fell over 3% in premarket trading after the iPhone maker reported its first miss on revenue since the holiday quarter of 2018, as Chief Executive Tim Cook said silicon shortages and COVID-related manufacturing problems led to a $6 billion negative hit.

But Cook also said demand for the company’s products were “robust,” which was providing a source of comfort for Wall Street analysts in the aftermath of surprisingly weak results.

A team of UBS analysts led by David Vogt said that they see December as a bottom for the company’s woes. Their checks indicate Apple’s supply chain and COVID headwinds in South East Asia impacted units by around 5 million in the quarter, but believe demand as “likely persistent given backlogs.

“As such our FY 2022 230 million unit [estimate] is unchanged despite the [near-term] disruption. Moreover, we believe our forecast could prove conservative if the 5M lost units are captured in FY22,” said Vogt and the team, who maintain a buy rating and 12-month price target of $175.

Among the positives: services revenue that came at $18.3 billion, some 7% above their estimates and paid subscriptions that grew to over 745 million customers, while Macs and iPads delivered “solid upside to estimates,” said the UBS team.