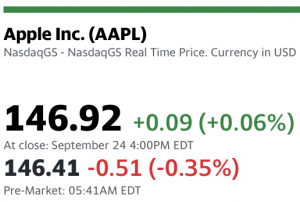 Oil prices rose as supply constraints continued to draw on inventories around the world and the continued rally in natural gas prices also dragged up crude, according to ANZ Research analysts. Global benchmark Brent crude rose 1.2% and traded at $78.15 a barrel, hitting the highest level since Oct. 2018...

Stocks swung last week as fears about Evergrande’s debt problems weighed on markets. Despite the Chinese property developer missing a bond coupon payment, the S&P 500 still finished the week up 0.5%. Federal Reserve Chairman Jerome Powell helped boost confidence when he said the U.S. economy has recovered sufficiently for the central bank to potentially announce the start of bond-purchase tapering at its next meeting.

“People have had time to think over the weekend and have decided that this is another occasion to buy the dip,” said Sebastien Galy, a macro strategist at Nordea Asset Management,referring to the practice of buying after stocks fall. “The high levels of liquidity in the market changes our view of the world and how fast we fade the fear.”

My take: Apple's future is a bullish slow stochastic according to Yahoo!Finance. Max pain is set at $147.