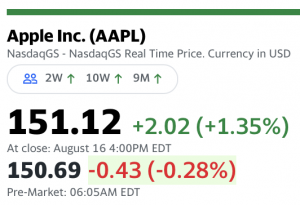 From Business Insider's "Global stocks pull back as wary investors monitor the spread of COVID-19 and unrest in Afghanistan" posted early Friday:

Global stocks traded lower on Tuesday as investors weighed the impact of the fast-spreading Delta variant, China's escalating regulatory crackdown, and the crisis in Afghanistan.

Excluding Apple, mega-cap tech stocks were among the biggest losers Monday, with the FANG+ index down almost 3% at one point. Tesla shares saw the biggest decline, falling nearly 5% after the US opened an investigation into the electric car-maker's autopilot system.

Weaker-than-expected Chinese economic data has contributed to the downbeat tone in markets, as has the persistent spread of the Delta coronavirus variant. Eight consecutive weeks of rising COVID-19 cases has raised the risk of a deterioration in economic outlook, Deutsche Bank strategists said...

Boston Fed President Eric Rosengren added fuel to the debate over when the Federal Reserve will begin tapering late Monday, when he said that continued job gains could give the central bank reason to cut its monthly asset purchases.

"If we get another strong labor market report, I think that I would be supportive of announcing in September that we are ready to start the taper program," the Fed policymaker told CNBC.

My take: Note the Apple reference in the second paragraph.