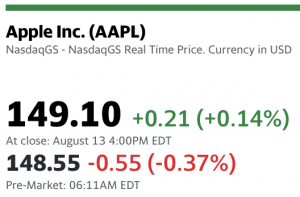 Stocks have ground higher in thin summer trading, buoyed by a bumper set of quarterly earnings reports from American companies. However, investors remain wary of the dampening effect of the Delta variant of Covid-19 on business activity, and potential pitfalls including geopolitical uncertainty and the possible removal of some stimulus by the Federal Reserve early next year.

The highly infectious variant has taken a toll on the economic recovery in China, where data published Monday showed growth in industrial, consumer and investment activity slowed in July. Investors said the world’s second-largest economy has likely continued to lose steam in August. following the shutdown of a major port and the introduction of travel restrictions to contain the virus.

“That is the reason why the market is a bit nervous today,” said Andrea Carzana, a fund manager at Columbia Threadneedle Investments, adding that European companies were particularly exposed to China’s economy.

Stocks are still the best place for investors to park money, according to Mr. Carzana. He noted that a majority of companies beat analysts’ estimates for profits and revenue this earnings season.

My take: I’m watching the fall of Kabul.