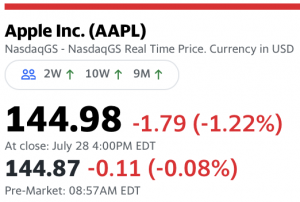 From the Wall Street Journal’s “Stock Futures Creep Up Ahead of GDP Data" posted early Thursday:

Earnings season is under way with Hershey, Comcast, Mastercard and Carlyle Group scheduled to report ahead of the opening bell. Amazon.com and T-Mobile are expected to post earnings after markets close.

“Most companies are in a pretty positive situation. They have cash, they have demand. It’s something that was a bit expected already from last quarter, but we’re still having positive surprises,” said Ludovic Subran, chief economist at Allianz.

Facebook posted sharp growth in quarterly revenue and profit late Wednesday but shares declined 3.5% in after hours trading after the company said it expects revenue growth to slow in the second half of the year.