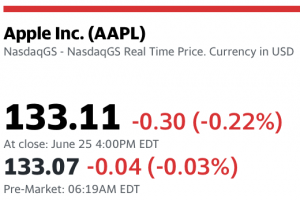 Futures for the broad market gauge, which closed Friday at its 31st all-time high of the year, drifted between muted gains and losses. Contracts on the Dow Jones Industrial Average edged 0.1% lower. Futures for the Nasdaq-100 ticked up 0.2%, pointing to modest gains for technology stocks.

Shares have marched higher since mid May, boosted by a robust economic recovery, the prospect of further fiscal stimulus and low bond yields that prompted investors to snap up stocks. Some investors are nonetheless concerned the market could hit a rough patch amid signs that growth has peaked as well as jitters over the outlook for inflationand monetary policy.

“This recovery still has a long way to go and there is still strong growth,” said Frank Øland, chief strategist at Danske Bank. “But of course you’re probably past the peak growth momentum in the U.S., so data will begin to look less impressive, and that could be a concern.”

My take: Apple shares gained about $12 during the June quarter that ended Saturday, but they’re still $12 below their January high.