Katy Huberty went after Apple bears with both barrels today

From the second of two Apple notes to Morgan Stanley clients that landed on my desktop Thursday:

We believe the iPhone strength is a product of strong global demand for 5G devices, but also a function of a retail store footprint that is now fully re-opened, and Apple accelerating adoption of trade-in, financing and installment programs.

Apple’s recent iPhone outperformance in China is most notable, as we estimate iPhone shipments in China grew 35% Y/Y in the month of May vs. 37% Y/Y shipment declines for domestic Chinese smartphone vendors (Exhibit 25). In fact, we estimate iPhone shipments have grown faster than domestic smartphone vendor shipments in China each of the last 8 months except for March 2021. This has helped Apple gain smartphone installed base share in China for 9 consecutive months, reaching a 2-year high of 20.5% in May 2021 (Exhibit 20).

While AirPods are one product where we recently revised our June quarter shipment estimates lower, we’d note the iPhone and iPad represent 60% of Apple’s revenue vs. just 4% for AirPods. Lastly, through the end of May, the App Store is trending 3 points ahead of our +11% Y/Y June quarter growth forecast (Exhibit 30). Collectively, these data points give us confidence that Apple can outperform June quarter expectations, and we are now 1-2% ahead of consensus June quarter revenue and EPS estimates.

My take: This is one of those chart-heavy Morgan Stanley IT Hardware Data Tracker notes. Below: The iPhone’s market share growth in China… 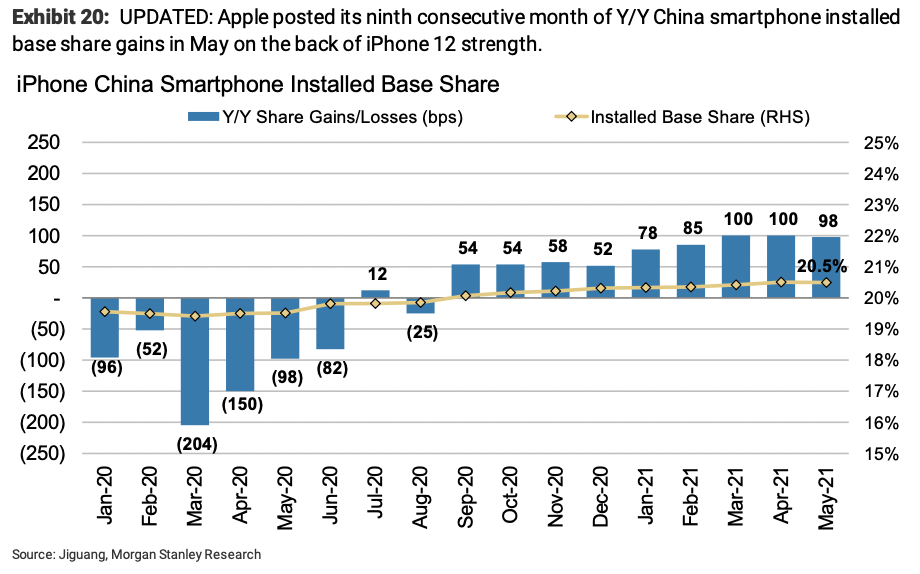