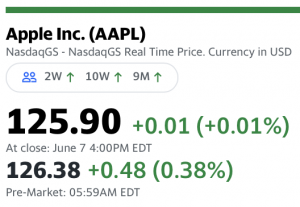 U.S. stock futures paused Tuesday, putting indexes on course for lackluster trading after the opening bell as investors awaited data on the scale of the trade deficit...

Stocks have been range bound in recent sessions, with indexes hovering close to record levels due to a rapidly rebounding U.S. economy and significant levels of support from Washington and the Federal Reserve. The market’s moves in recent weeks have moderated amid inflation concerns. Investors say they are settling in for a period of choppy trading while they await fresh clues on whether a sharp rise in consumer prices will prove to be fleeting.

“There will be constant gut checks from both the bond and the stock markets on whether this is transitory, or is turning into permanently higher inflation,” said David Donabedian, chief investment officer at CIBC Private Wealth Management. “I would still put the odds of a higher S&P 500 at the end of the year as better than 50%, but I think there will be more volatility than return to be had in the second half of the year.”

My take: The whisper of an upward trend.