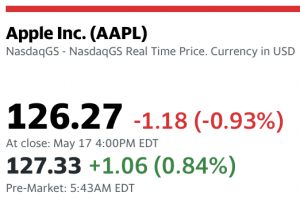 U.S. stock futures edged up Tuesday, suggesting that the major indexes are poised to rebound ahead of data on new home building…

Stocks have been choppy in recent trading sessions as concerns about a spike in inflation weighed on sentiment. Investors are contending with a raft of unknowns, such as whether rising prices will prove temporary or more persistent, and whether the Federal Reserve will act by raising interest rates sooner than planned.

“That always was the key risk: central banks taking away the liquidity punch bowl before the party has ended,” said Brian O’Reilly, head of market strategy for Mediolanum International Funds.

Inflation ranging between 2% and 4% could be the “sweet spot” for stocks, said Mr. O’Reilly. The economic rebound that is fueling inflation is likely to continue benefiting stocks that are sensitive to the reopening, such as banks, travel and leisure companies. But companies with strong balance sheets and an ability to raise prices, such as pharmaceutical companies and makers of common household goods, should also do well, he said.

“Inflation isn’t necessarily bad for equities, but there will be winners and losers in terms of [which ones] are better at passing on that inflation to the customer,” said Mr. O’Reilly.

My take: A continuation of yesterday’s close.