“He didn’t eat a crow,” says Cramer about Hall’s post-earnings Apple note for Goldman Sachs. “He ate every crow in that picture.” 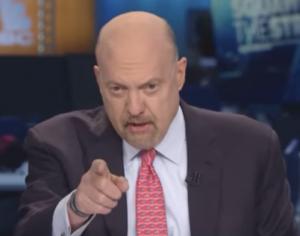 My take: Weird moment when Cramer points at the camera, says “He’s probably a nice guy,”  and hold his stare for a long beat. What could it mean?