Another reason to stick with Apple Pay

From Android Police’s “American Express cards are being removed from Google Pay and we don’t know why” posted Thursday: 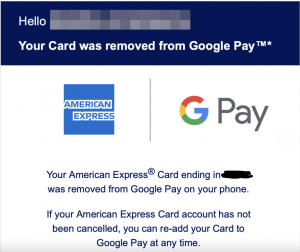 If you got an email today that explained your American Express card had been removed from Google Pay on your phone, you aren’t alone. We don’t know the precise cause (yet), and it doesn’t seem to affect all phones, but reports of the issue are widespread. Re-adding the cards back to your Google Pay wallet may work, though experiences vary.

Several American Express customers in the last twelve hours or so are reporting receiving emails similar to the one depicted above, explaining that their American Express cards have been removed from Google Pay on their phones as a payment option. And true to the email’s words, the cards themselves have also disappeared from the Google Pay app.

At least one of us here at Android Police has also run into the issue, via an email received at around 4 AM ET — which seems to be when the emails started going out, according to reports. Interestingly, not all phones with American Express cards in Google Pay seem to be affected. For one of us that ran into the issue and received the notice, only a OnePlus 9 Pro and Mi 11 Ultra had the offending card removed, though the card remained a payment option on other Android devices.

We’ve reached out to Google and American Express for more information regarding what happened. Representatives from both companies tell us they’re looking into it.

My take: Android Police? Who knew.