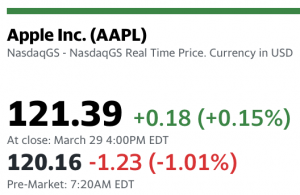 U.S. stock futures wobbled as investors sold down government bonds and richly valued technology stocks that had powered higher in a low-yield environment...

This year, investors have exited government bonds as the brightening economic outlook and concerns about higher inflation combined to sap demand for what are seen as the world’s safest assets. Some money managers are betting that the Federal Reserve will raise interest rates in 2023, despite the central bank pledging to keep monetary policy loose until the labor market has recovered and inflation stays above 2% for a period...

The sharp rise in yields, which were as low as 0.915% at the start of the year, has curbed appetite for technology shares, many of which won’t generate large profits in the immediate future. Investors have instead started moving money into stocks that would benefit most from the economic rebound, such as energy, banks and airlines.

But that so-called reflation trade has also floundered in recent days on rising concern that elevated Covid-19 infection levels, new variants and problems with the vaccine rollout could hamper the global economic recovery.

Money managers are continuing to watch for any further fallout from Archegos Capital Management’s liquidation of more than $30 billion in stocks in recent days. The hedge fund’s losses prompted banks that had been handling its trading to unwind positions, and warn that they too may incur some losses. Global bank shares tumbled on Monday.

“Everyone’s trying to work out who the next hit is going to be, what is the next investment bank tied up in it,” said Charles Hepworth, an investment director at GAM Investments. “It doesn’t seem like it is systemic, so that has hopefully been contained and isn’t some kind of Lehman moment.”

My take: Floundering reflation, liquidating hedge funds and talk of a Lehman moment. What else could go wrong?